Be the first to review this product
€419.00 €352.10
Will be ordered for you.
If you need this very urgent, please contact us and we keep you informed about the delivery date.
Add to Wish List Add to Compare
high quality audio intercommunication
Skip to the end of the images gallery 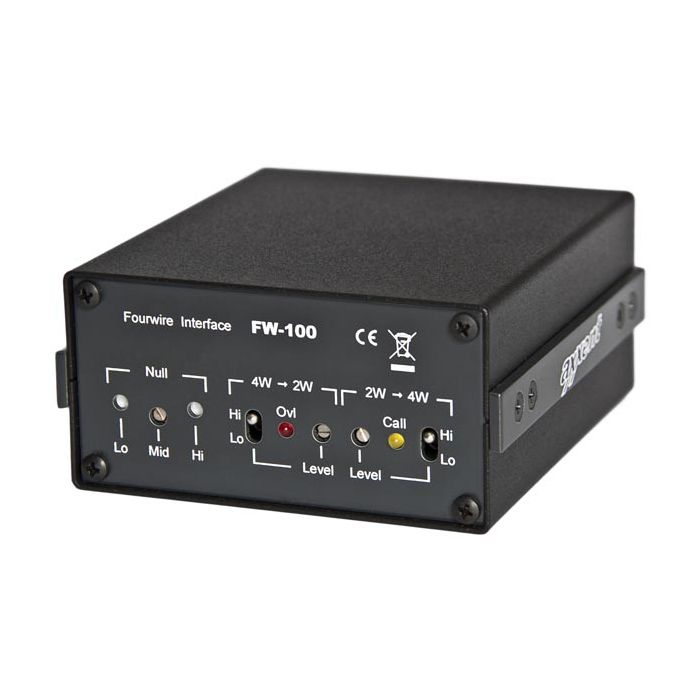 Often, a connection between these principally different systems is wanted and axxent has now developed such an interface. In addition to intercommunications, the new interface FW100 allows visible call signals (tally) from and to the systems. Connection to the partyline side is by two 3 pin xlr connectors – the same as with any call signal light or a belt pack.

Connection to and from the four wire system is through the DB9 plug. Two wires to the system, and two wires from the system. In addition, two unshielded wires allow the signalization from the four wire side by a contact switch. Signalization from the partyline system is by two wires and a pulse signal of approximately 1.5 volt that could trigger a relay or a contact. Also, the call signal is indicated on the adaptor by an led.

Possible echo caused by the interconnection of the system can be nulled by three potentiometers on the front side of the unit. Level control to and from the systems is by switches and potentiometers – also on the front. As usual with axxent products, the FW Four Wire Interface has been built solidly in a compact steel case for long lasting use.

Interconnection DB9 cable is is not a standard accessory but may be ordered separately. This cable splits in two shielded two wire cables for audio and four unshielded wires for call signalization. The optional cable has no xlr connectors soldered because connections of four wire systems are widely different. Necessary power for the FW100 electronics comes from the partyline intercom system.