Be the first to review this product
€749.00 €629.41
Will be ordered for you.
If you need this very urgent, please contact us and we keep you informed about the delivery date.
Add to Wish List Add to Compare
MC-2 is a high-performance digital audio signal and reference sync signal distribution amplifier and format converter for AES/EBU and AES/EBU ID signals.
Skip to the end of the images gallery 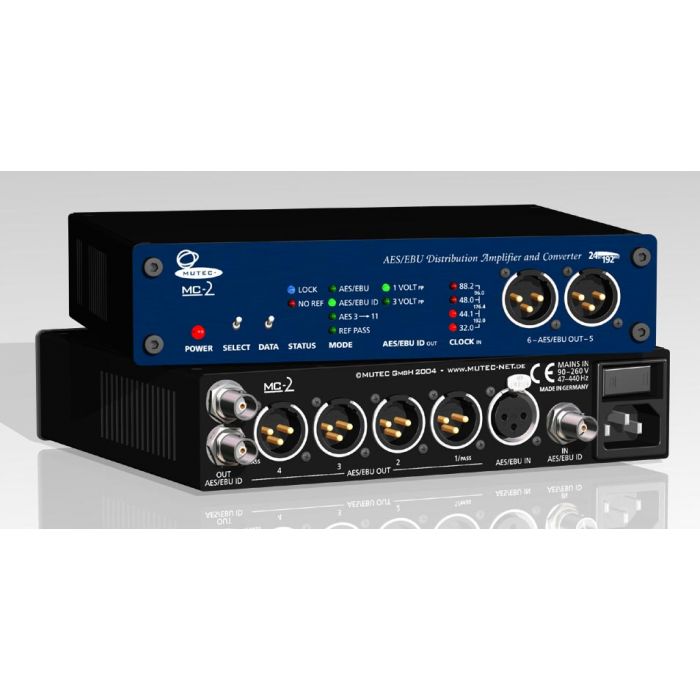 MC-2 comes basically as an AES/EBU distribution amplifier. Additonally AES/EBU ID interfaces are available to offer conversions between both interface standards. Using latest PLL and conversion techniques, MC-2 processes digital audio signals aligned to AES3 and AES3 ID and reference sync signals aligned to AES11 and AES11 ID including all usual clock rates from 32kHz to 192kHz. Each interface standard offers one input whereas AES/EBU can be distributed to
6 outputs and AES/EBU ID to 2 outputs.

Various operation modes enable the use of MC-2 in a wide range of applications. An input reference signal will be distributed to all outputs simultaneously. In this process, a conversion between the AES/EBU and the AES/EBU ID interfaces will be done automatically.

A supplied AES3 digital audio signal can be converted in realtime into an AES11 digital sync signal and distributed through all outputs. To keep the original AES3 signal for further use, the first output of the according interface standard can be switched to pass the original signal separately without any format changes.

The voltage of the outputs of the AES/EBU ID interface can be switched from standard 1V to 3V to enable very long cable runs.

MC-2 is mountable in a 19" rack system by using our optional rack adapters.
All functions can be set convenient from the front panel with help of a simple user interface. The device is shipped in a rugged aluminium housing and meets CE, UL and FCC, part 15, specifications.