Be the first to review this product
€1,279.00 €1,074.79
Will be ordered for you.
If you need this very urgent, please contact us and we keep you informed about the delivery date.
Add to Wish List Add to Compare
Classic VCA Buss Compression
Skip to the end of the images gallery 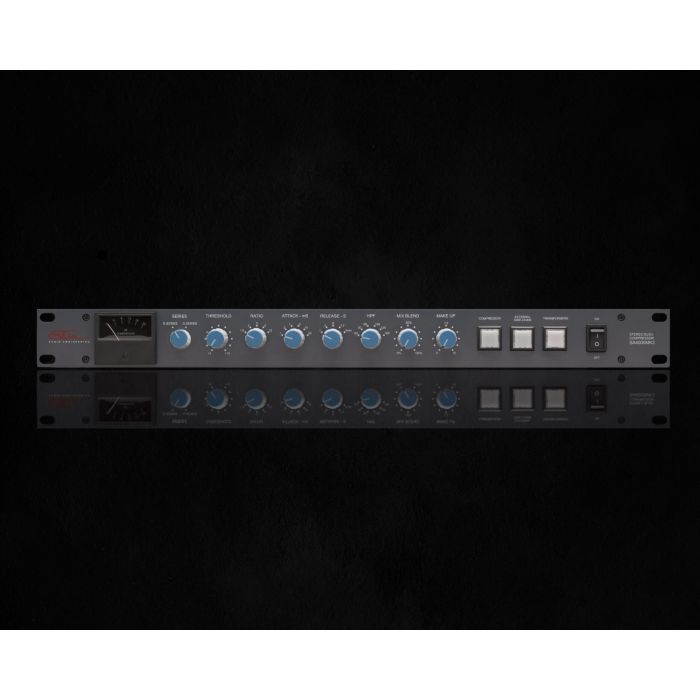 The SA4000 MK3 is the most authentic recreation of two iconic buss compressors found in the center section of the legendary G and E Series Oxford Consoles. An overwhelming favorite among mix engineers, the G and E series have very likely shaped more hit records than any other over the past three decades.

In 2018 we set out to build the most accurate 4K G series buss compressor replica we could. To achieve this vintage character, we had to reverse engineer and bring back to life the now obsolete DBX 202C VCA “gold” cans found on the Oxford consoles from the 80’s, so we did.

The Stam Audio SA4000 MK2 saw the introduction of our meticulously reverse engineered SA-202 that brought back the character that was missing from modern builds and clones using a single or multiple chips as well as several new functions, but there was something missing.

Based on an exact replica of the E Series console from 1986, we designed the SA4000 MK3 with not two but four SA-202C cans, two in the gain reduction circuit and two on the sidechain of the unit. While in theory this should not affect the audio path, the outcome was remarkable, the kick drum and snare, as well as the mid frequencies popped out like we had never heard before on a 4K, making it the ideal and perfect drum bus compressor.

Since thousands of users love the MK2 around the world, we decided to keep this part of the design intact and add the Quad Discrete VCA E Series console at the twist of a knob on the MK3’s faceplate. The SA4000 MK3 now gives you TWO legendary buss compressors in one unit, the famous G Series from the late 80’s and the E Series from the mid 80’s.

At Stam, we do many things differently, and one of them is that our ears are the ultimate decision maker. We spend thousands of hours listening to every component and circuit change despite science and engineering telling us that it should bear no difference in the tone of a unit. More frequently than not our theoretical knowledge is proven wrong.

The SA-202C is an identical and fully discrete reproduction of the original VCA cans used on every single desk from the 80’s. They impart a unique coloration and rich harmonic distortion, which led these desks to be recognized for two things: glue and character. Each Stam Audio SA-202C is built in the same old fashion as the original, with a complex system to hand match the very same transistors and values. A full day is spent just to build matched pairs.

After the DBX cans, capacitors have the biggest impact on the overall sound of a 4000 buss compressor. For this reason, we auditioned 16 brands to find the absolute best sounding ones for this circuit. Elna Silmic were by far our favorites; they present a wider frequency response than any other brand and give you the best possible stereo image.

We took this opportunity to perform several upgrades to the original SA4000 and added the following features:

We now offer 3 optional Mods. All pricing for Mods includes parts and labor and can be activated with the transformer button.

The “British” mod adds two Carnhill output transformers together with two BA283 output cards, which are used on the output section of the classic 1073 preamps and channel strips; making it the perfect way to add low-end and effortlessly warm up a mix.

The “American” mod adds two SA-2520 opamps (an exact replica of the original 2520 op amp) with 2 Steel 2503 transformers to the signal, making it the perfect way to add punch to your drum buss; giving you the famous American sound.

The American mod is 500 USD

The Fairchild MOD adds two HS-52 AMI output transformer replicas used on the Fairchild 670 and 660 on the output stage, along with four 6BA6 tubes, which are used on the StamChild 670; turning your 4K into a tube SA-4000 with rich harmonics and beefy low-end.

The Fairchild mod is 800 USD

At the heart of the SA4000 MK3 are two Stam Audio SA-202C VCA cans, which are fully discrete and identical replicas of the original DBX 202C gold cans found on the original vintage SSL consoles. This makes the SA4000 MK3 the only bus compressor in the world to faithfully replicate the inner circuit of the original desk. Each SA-202C can is made by hand in Chile, where transistors are carefully matched in a proprietary circuit.

There is no compromise in parts throughout the entire circuit, which ensures you get a compressor that behaves and sounds 100% accurate to the original. All our units are hand made and calibrated in our workshop in Chile, where they get a full health check twice and burn for 24 hours.

The ultimate cure for “digititis”

While plugins have come a long way and are incredibly useful, there’s a reason the top engineers still have analog gear in their racks. And some of the biggest gains to be made if you’re mixing “in the box” is to use quality hardware on your master buss.

When you strap the SA4000 MK3 Stereo Buss Compressor over your master buss, your mix will instantly glue together and sound more cohesive. Small adjustments will bring more punch, tightness, power, and size to your mix…all without sacrificing clarity. Simply put, your mixes will sound like a record should!

Legendary on the mix bus. Magic on the drum bus. It’s one of those rare pieces that just makes things sound better regardless of the musical style.

If you’ve worked on a classic SSL G Series or E Series desk and strapped the Buss Comp across your mix, we’re extremely confident the SA4000 MK3 will put a big smile on your face every time you use it. However, if you’ve never touched either of the originals before, as gear lovers ourselves, we understand that the only way to really know if this compressor is for you, is to put it through its paces. That’s why the SA4000 MK3 Stereo Buss Compressor comes with a 30 day money back guarantee. This allows you to get it into your rack and see how it impacts your recordings. If you love it (and we think you will!), great…keep the unit and create amazing music with it. If not, no problems. Just send it back to us and we’ll fully refund your purchase.